When the phrase “Don’t lose your identity” is used, it implies that you should only find your identity where society deems acceptable. Any other identity is ‘forced’ on you. You are accused of settling for less than your potential. Let me share why I lost my identity, willingly.

I was on the phone with my friend the other day and she was telling me how her aunt was cautioning her as a mother to not to lose her identity. She told her aunt, “But I like being a mother. I am a mother. This is part of who I am.”

Society says it is okay to find your identity in: Anywhere but the home.

If one woman finds her solid identity in the workplace, that’s great! That is where she should be.

Another woman may find her identity in singleness. Awesome! Then she should not feel obligated to marry.

What are you afraid you will lose?

The First Time I Lost My Identity

When I was 13 my perfect outside appearance I was trying to maintain became too much for me. There was so much strife and sin inside me that the more I tried to keep it hidden the more it oozed out of me.

I was desperately failing to be this person I identified myself as. It was exhausting. 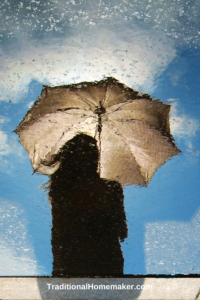 He became my identity.

Don’t get me wrong, I’m still my crazy, human self. But I have Jesus’ parameters to live by now.

I’m under His umbrella, so to speak. I have so much freedom within my identity in Him, but I clearly see the edge. The edge where if I choose to step out from under the umbrella, I’ll be on my own again.

The Second Time I Lost My Identity

Grandpa had as much as given up on me marrying, but he would catch himself and say, “But I’m sure you could still find an old bachelor to make happy.”

In a society of crumbling relationships I wanted to be sure of mine.

Now I am under my husband’s umbrella. I’m still my crazy, human self! But I’m on a team now. I have a partner, a leader, a provider. A new identity.

The Third Time I Lost My Identity

The most recent time I lost my identity was in motherhood.

By choosing to become a mother, I chose to give up other aspects of my identity:

I’m still my crazy, human self! I just have someone else to look out for now. A helpless human being who is completely dependent on me.

Becoming a mother makes me no lesser of a Christian or a wife. It just adds to my identity. And I’m proud to claim motherhood as a part of my identity.

Why I Lost My Identity

Why do I choose to lose my identity?

I know that in order for the desires of my heart to be fulfilled I have to give up the less important things. 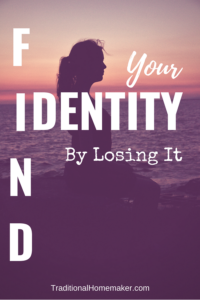 For eternal life and forgiveness of sins I had to give up my selfish, sinful ways to make a home for Jesus in my heart. Though I fail often, He reminds me of my identity in Him!

For marriage I had to give up my single life of carelessness. I have a husband to be accountable to. I have someone to care for and keep a home for.

What I Have Gained By Losing My Identity

By losing my identity I have gained an outward focus on life.

When I sit around looking inside myself trying to figure out who I am, I don’t get very far.

My brain and heart are small. My soul is only so deep. It get’s depressing and boring thinking that my role is to satisfy me, make me happy, serve me, me, me, me…

But when I open my eyes and look around, that is when I see who I really am.

I see my identity.

So, go ahead! Lose your identity. And see what you find…