When I was pregnant, I had read several books promoting breastfeeding until at least the age of two. Some encouraged beyond that! But my goal was to breastfeed until two. Sometimes dreams get squashed so I was looking for nutrient dense foods for baby’s bottle when my little guy was just 11 months.

Most babies at this age are eating solids pretty well and enjoying a variety of foods. My boy was not.

He didn’t do textures well and he gagged a lot.

So I turned to his bottle.

What could I add to his bottle to get as much nutrient dense food into him as possible?

I began researching and found quite a few options for nourishing my baby through his bottle.

All my plans for my birth and baby didn’t go as expected, so why should breastfeeding?!

I started out pumping every three hours, then every four, then every 6 and down to twice a day by the time my baby was 11 months.

At 11 months I was still clinging to the hope of bringing back my supply but no amount of pumping, water, tea and rest helped me produce more than one ounce a day. 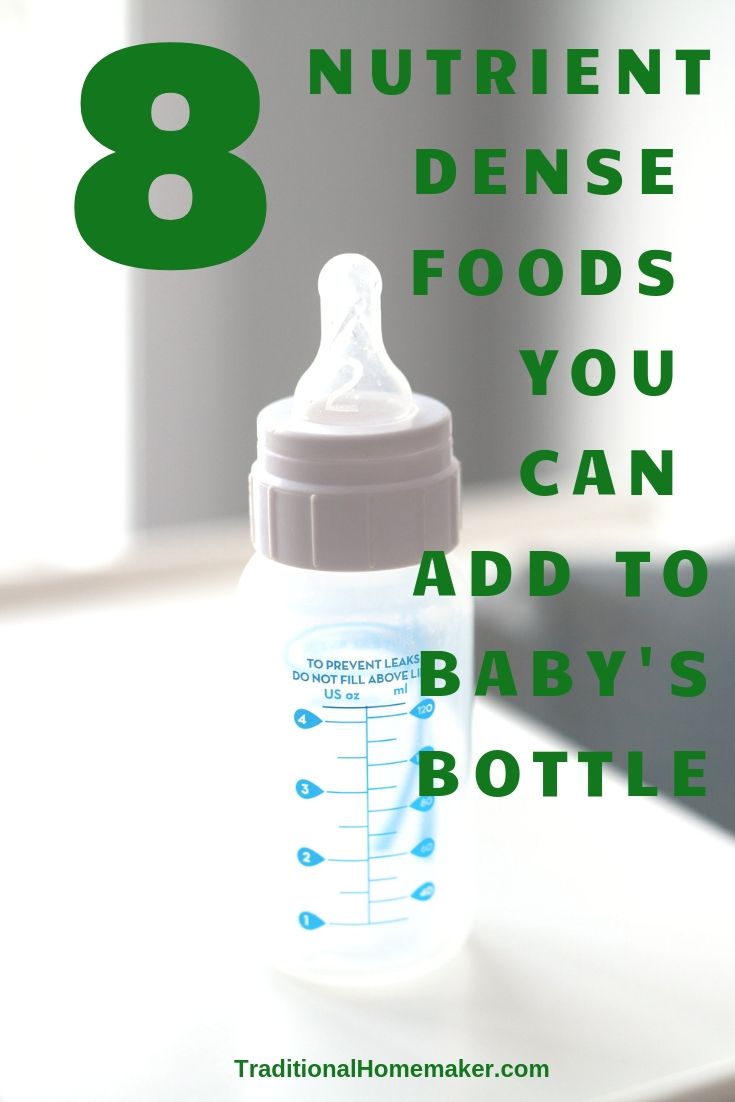 I felt horrible inside and guilty for not being able to give my baby the best nutrition. Finally my husband said, “You know, it’s okay to stop pumping. You’ve done the best you can.”

And that released my guilt and uneasiness and I stopped the next day. I didn’t realize how much I was stressing over not providing enough milk for my baby!

*I’m not a doctor, nor am I certified in any nutrition program. This is just what I’ve read and researched for my own child.* 1. Raw Milk – The most important thing for me and nourishing my baby was to start with raw milk. Thankfully, I had an easy source because our family dairy farms.

I wanted to be able to provide lots of good bacteria and enzymes to my baby’s gut. After all, breast milk is raw!

[Learn how you can find raw milk in your area.]

Read More: How to Start Getting Raw Milk

2. Desiccated Liver – As I mentioned above, my little guy wasn’t very good at eating solids, even at 11 months. He was still getting the majority of his nourishment from the bottle.

Rather than blending up chunks of liver in his milk every time I made him a bottle, I found this reputable source of desiccated liver

. Liver is an excellent source of iron, B vitamins, protein and vitamin A.

At my son’s checkup where the doctor checked iron levels, he was extremely low. I gave him the iron supplement from the pharmacy for three days until my liver came in the mail. He got one capsule a day distributed through all his bottles.

At his next checkup he was just a hair low in iron still, so I bumped him up to two capsules a day for a short time, then down to 1 1/2. He now has normal iron levels and I continue supplementing with desiccated liver.

I just break open a capsule and pour some into each bottle. It settles to the bottom, but if you gently shake the bottle a couple times while baby is eating, it stays pretty well distributed.

3. Gelatin –  I add a little bit of soaked gelatin

to each bottle for protein and amino  acids that help protect the gut lining.

First, I put 1/4 cup of cold water in a little jar. Then I add a teaspoon of gelatin and let it sit for 10 minutes. It will soak up all the water and then will dissolve easily in the bottle once it’s warmed. 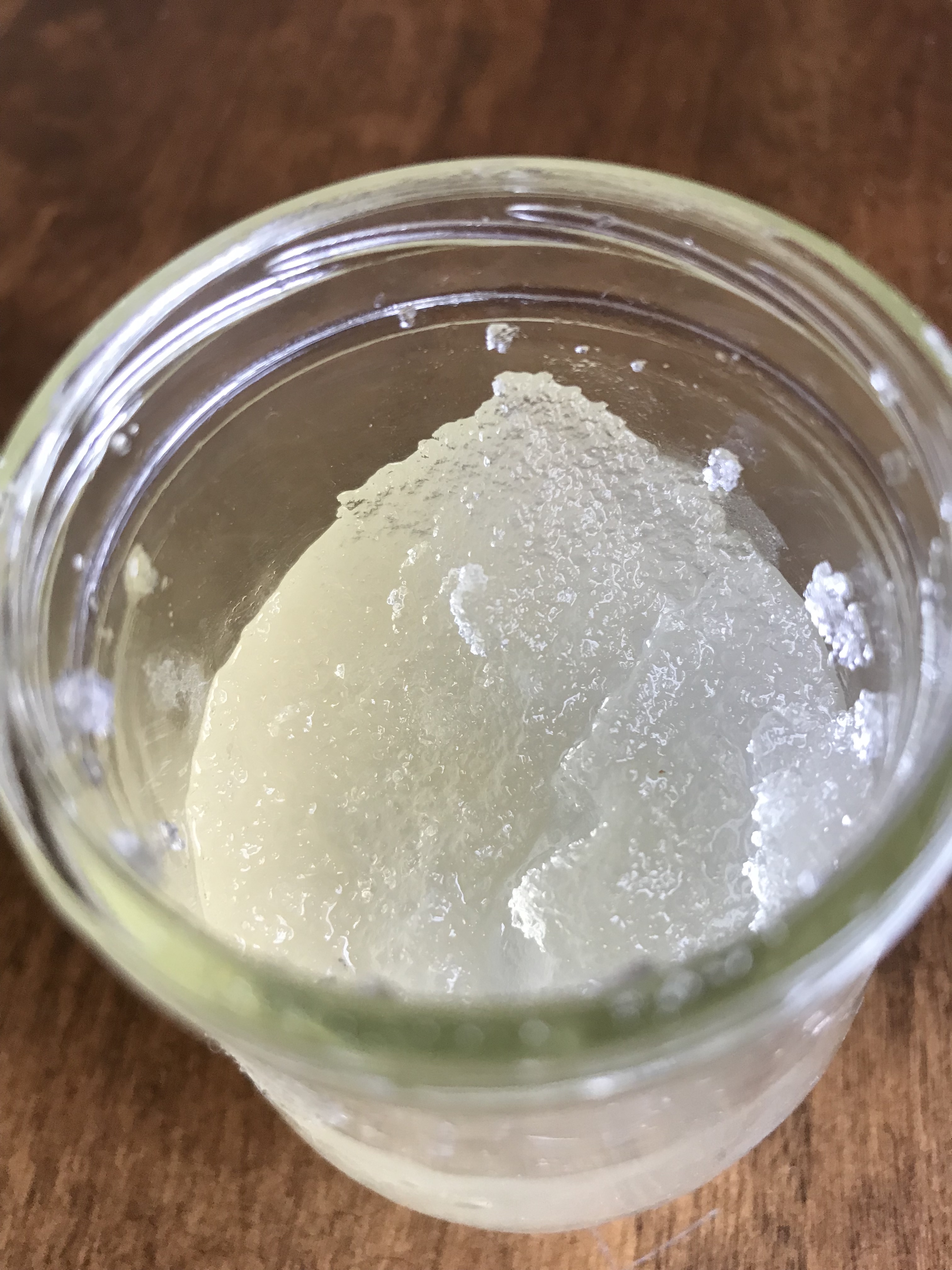 . It is full of probiotics and other healthy bacteria for my little guy’s gut.

In each bottle I put about a tablespoon and then fill the bottle the rest of the way with milk.

Read More: How to Make Kefir at Home

11 Ways to Use Kefir

5. Probiotics – My boy gets lots of probiotics from the kefir and his favorite food – yogurt. But there are so many different strains of probiotics that play a crucial role at different points along the intestinal tract.

I add 1/2 a capsule of Just Thrive probiotics

his bottles now and then because these strains have a longer life span than the usual kefir and yogurt strains.

Another reason I push so many probiotics is because my son was born caesarean so he missed out on the vaginal bacteria populating his gut mucosal walls.

Read More: How I Made My Preemie’s NICU Stay More Natural

6. Cod Liver Oil – I put one mL of fermented cod liver oil in one of my son’s bottles a day. During the summer months, I back it down to a couple times a week because he is out in the sun more, getting vitamin D.

Because cod liver oil is a great source of vitamin A, I didn’t add it while I was giving higher amounts of liver to help his iron levels. I didn’t want to overdo it on the vitamin A my son was getting.

Even though naturally sourced vitamin A as whole foods isn’t as easy to overdose on, I still chose to eliminate cod liver oil while giving larger amounts of desiccated liver.

I only buy the unflavored cod liver oil

for my son. Personally, I love the mint

flavors, but they are pretty strong for a little human.

7. Bone Broth – I make my own chicken broth out of pastured chickens from our neighbor. When my son is sick and congested, I mix his bottles half milk half broth to help cut down on mucous. Broth is also an extra boost of nourishing vitamins and minerals to help his body fight infection.

[Learn from Sarah at The Healthy Home Economist how to make broth!]

He doesn’t get broth regularly in his bottles, but I keep some in the freezer for times when he gets sick.

If you don’t make your own broth, consider a nourishing brand like Kettle & Fire Chicken Bone Broth

8. Egg Yolk – Once in a while when my son doesn’t eat much throughout the day and I want him to go to sleep for the night with a full tummy, I add an egg yolk. We get our eggs from a neighbor lady and they are a deep orange color packed with nourishment.

By carefully separating the yolk from the white it blends nicely into the milk with a little bit of stirring. You have to get most of the white off though, otherwise it will clog the nipple hole.

But what about the flavor?!

Smelling my son’s bottle while I’m making it makes me want to gag! But everything I’ve added to his bottles he’s never rejected. I don’t know if it’s because the nipple goes in his mouth far enough to bypass most of his taste buds or if he’s just acquired the taste.

Either way, my son still loves his bottles even with all these goodies added!

*I’m not a doctor, nor am I certified in any nutrition program. This is just what I’ve read and researched for my own child.*

Just because you can’t provide your child with breastmilk doesn’t mean you still can’t provide him or her with the best nourishment.

Do some reading on your own and find out what’s best for your child’s age and stage of development. Also, do some homework on sourcing the best quality foods. Consider these nutrient dense foods for baby’s bottle when you are doing your own research.