I began wearing deodorant at (what I would consider) a very young age. When I was in 2nd grade I was getting a ride home with our neighbors and the mom couldn’t figure out who of her kids hadn’t put deodorant on that morning.

Then she realized it was me.

Mom got me my first tube of Secret deodorant and it did its job…for a while. 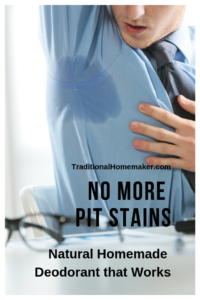 As I got older I began sweating a ton more. The deodorant/antiperspirant combos didn’t help much anymore.

I began carrying a stick of deodorant in my backpack. One was stashed in my locker. Then when I got home from school I would put more on.

I had to have a stick hidden everywhere!

We began our intentional healthy lifestyle when I was in middle school. Mom desperately tried to find a natural deodorant that would work for me. [Natural products are usually just a deodorant and not an antiperspirant.]

In fact, the natural varieties made me stink worse! The smell was awful and the completely soaked pits were awful.

Then I got to the point where I just didn’t care.

In high school I started buying my own deodorant. I got those prescription strength, 72 hour products with warning labels everywhere and that you have to apply the night before.

Having mostly dry pits and no stink was a great confidence boost through high school.

But the thought of all those warning labels and nasty ingredients still nagged at my mind.

After I was out of high school, I got brave enough to do a couple detoxes.

On several different occasions I would go months without wearing any deodorant. My hope was that if I just let my pits alone and continued eating whole, nourishing foods that my stink would lessen or go away.

So I went back to just regular strength deodorant from the store shelf.

Surprisingly, my now-husband wasn’t scared off by my subtle stink.

I didn’t stink horribly anymore because in the mean time I’d also learned that any man-made fibers made me stink much worse. Only wearing cotton shirts helped cut back on the B.O. a ton!

After we had been married several months, I decided to try making my own deodorant. I’d been reading more and more about it on the internet so I picked a recipe and tried it.

I struck gold with the first recipe I tried!

This recipe from Mommypotamus has coconut oil

It was so simple I could make it without having to order any special ingredients.

I planned to trial it during a week that I was mostly going to be home. I loved its buttery, creamy consistency and the way it felt dry right away under my arms.

That whole week I kept waiting for the stink to crop up on me. It never did! So I kept using it convinced that eventually my body would adjust to it just like it did to any other deodorant I tried.

But it never did! 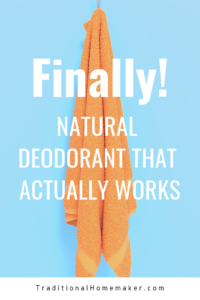 after I had already begun to stink.

Most natural deodorants you have to wash with soap to kill all the stinking bacteria before you re-apply.

This stuff was like magic! It was late on a summer afternoon when I’d begun to stink so I just applied the deodorant without washing or anything.

My stink went away and I felt instantly refreshed!

Long answer: I’ve never worn super tight fitting clothes so I don’t often have fabric right up in my pit.

Also, I still mostly avoid synthetic fibers on my upper body. This easily launders out of cotton.

The one rayon shirt I have is black and has white circles under the arms on the hanger. Once I put it on, my body warms up the fabric and the white goes away before I even leave the house.

One of my t-shirts is a cotton/polyester blend so it has permanently white tinged pits. It is also 12 years old…

All the rest of my tops are cotton and show no sign of deodorant stains.

and a makeup brush

– just like you would set your makeup. This would keep the deodorant on your skin and not on your clothes.

How do you travel with an oily mess like this waiting to happen?!

I will admit, traveling takes a bit more forethought with a container of coconut oil in your luggage!

I’ve never flown with this deodorant before, but I’d recommend keeping it in your carry-on so that it doesn’t get heated to melting in the cargo area.

Most of my traveling is in my van so I put my jar of deodorant in a zipper baggie in my luggage. I make sure my luggage isn’t front of a heat vent and drive.

Summertime traveling I have a small cooler

anyways for snacks and drinks. I just keep my deodorant in there, too!

Actually, my homemade lotion can’t melt either so that goes in the cooler as well.

So I got my recipe from Heather at Mommy Potamus. I use her basic recipe: coconut oil, baking soda and cornstarch or arrowroot.

You can choose your own essential oil to add. Just be sure to research if it can be used on the skin in this way! Remember: essential oils are strong and need to be used wisely. Dr. Z is great resource for wise use of essential oils.

I personally use frankincense in my deodorant because it is great for breast health and I enjoy the smell.

If you would like to put your recipe in an old roll-on tube for convenience, try the shea butter version as the coconut oil version will be too soft to apply from a tube.

with an old mayo lid!

You should take time to read some of the comments of Heather’s post, as well. There are tons of helpful tips regarding sensitive pits, darkening and recipe alterations. So helpful!

Don’t Give Up on Dry Pits!

Just because you’ve always been a sweaty mess doesn’t mean there isn’t hope for you. This natural homemade deodorant that works has been a confidence booster and life saver for me!