Hash browns are one of those things you only order at a restaurant because they know just how to make them. They arrive on your plate crispy and golden brown – the perfect accent to eggs or an omelet.

I’ll let you in on a little secret. Hash browns are super easy to make at home!

I haven’t always known my way around hash brown heaven. My mom made them for us once in a while when we were kids but they were soggy, slimy and gray. We ate them anyways because we didn’t know how great hash browns could be. That, and we’d go hungry for not eating them.

When I married my husband, he liked the pre-formed hash browns. I bought those for a few months and got disgusted with the price and the extra ingredients. So I switched to buying the bagged, loose hash browns.

Yeah, that was a disaster. The first time I made them I put the lid on the skillet – a big no-no. The next few times I didn’t add enough grease so they burned on me. Thankfully my husband was patient on my hash brown journey!

After I finally mastered making loose hash browns out of the bag, I decided to make them from regular potatoes. I mean, really, how hard could it be!?

After a bit of research on know-it-all Google, I discovered my big mistake: I hadn’t pre-cooked the potatoes.

So the next time I went to make hash browns I got started a little earlier on breakfast, boiled my potatoes and began to peel them. Oh but they were hot! I didn’t have time to let them cool sufficiently, so burning my hands was my only option.

Eventually I got the steaming potatoes peeled and shredded into the skillet.

I knew there had to be a better way than starting breakfast earlier and still scalding my hands.

After some experimenting I feel I have perfected my hash brown skills.

So here I am to share my method with you.

The Best Hash Browns Ever

What you will need: potatoes, grater

Step 1. Boil potatoes. Choose potatoes that are all about the same size so that they cook at the same pace. Place potatoes in a kettle and cover with water. Place a lid on them and boil. It’s hard to say how long to boil them for because the time will depend on the size of potatoes. Check them periodically by sticking a paring knife into the center of a potato. When it goes in smoothly they are done. Another option is throw a few extra potatoes in the oven when you are having baked potatoes for supper.

Step 2. Cool potatoes. Place a sieve in the sink and dump the boiled potatoes in it. Let them cool there.

Step 3. Store potatoes in the fridge. I store my potatoes loosely in the vegetable drawer. They keep in the fridge for up to two weeks! When I want to make hash browns I pull one out, peel it and fry it. But then I am only making enough for two people.

Step 3a. Peel the potatoes if you haven’t peeled them ahead of time. You do not need a peeler for cooked potatoes. Simply use a paring knife and grab some skin. It will pull right off. 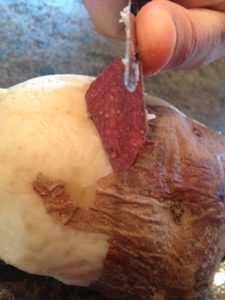 Step 4. Shred potatoes. I have one of these simple box graters

for shredding. For large quantities of hash browns you can use a food processor

with the grater blade. A salad shooter

is what my mom always used for our family of six.

Step 5. Fry potatoes. This step is where the magic happens. You need to start with a heated skillet. Cast iron 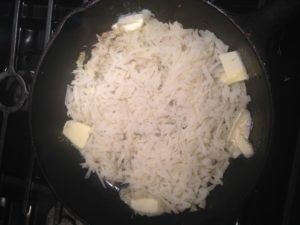 but any heavy skillet will do

. If you are making them for a crowd, use an electric griddle

. Make sure you have plenty of grease melted in it. I’m talking two to three tablespoons for one

medium sized potato! I use half bacon grease, half butter (see #6 here). The bacon grease adds some depth of flavor and the butter helps the hash browns turn golden. If you don’t have bacon grease saved up, straight butter works great, too.

Let the hash browns fry until you think they are golden brown and then let them fry a little longer. Your skillet should not have dry spots showing. If you see a dry spot, add more grease there. Flip the hash browns in manageable sections and let them fry on the other side. Of course you must add more grease when you flip them.

After frying them to golden brown on the second side you can stir them a bit to let the inside potatoes get browned.

Not only are these hash browns free of any questionable ingredients but they are also an excellent source of resistant starch! Check out what Mommy Potamus shares about the benefits of including resistant starch in your diet.

Hopefully this hash brown tutorial will give you the confidence to wow your family with an awesome breakfast this weekend!

Let me know in the comments below how your hash browns turn out! Pin this to remember for later!