In my experiences, dietary fat has a negative connotation; not to mention even lard.

Butter, not so much. I talk about my love for butter or that it is the secret to a really good recipe and people smile and nod their heads and take another bite.

Lard, on the other hand, evokes looks of disgust that I forever cherish in my mind while I am happily measuring it into another recipe. Church ladies rave over the flakiness of my pie crust. I smile and say thank you. Then the cute little proper ladies ask what is in it. I smile sweetly and say, “Butter…and lard.” And then I smile at them long enough to watch them have to choke back the urge to spit out their bite of pie. (Ok, I’ll admit I have a twisted idea of “fun.”)

Lard comes from several different animals but my favorite to work with is pork lard. More recently I have used bear lard. Bear lard is wonderful! It doesn’t set up quite as firmly as pork lard so I have to adjust it some in my recipes. It also has makes my pie crusts harder to work out, but even more flaky.

When we don’t have a hog custom butchered for us, I swing by the local butcher shop and ask them if I can buy some leaf lard. (Leaf lard is the fat layer that directly surrounds the kidneys of the pig. It is the best quality for using in the kitchen.)  The butcher usually looks at me like, “What kind of weirdo actually wants to pay money for something I throw away?!”

Lard is an excellent cooking fat because it is very stable. By stable I mean that the single bonds forming saturated fat are not easily broken by high heat. When bonds are not broken, free radicals are not produced and your body is not damaged by the heated fat.

Also along the health lines, pasture-raised lard is full of vitamin D! One thousand IUs in a tablespoon to be exact. And Dr. Price recommends it for its health properties.

Economically speaking, lard is cheap. Buying it from a butcher is very affordable and rendering it down requires little involved time.

For flavor, lard is pretty neutral if rendered properly. Unlike olive oil, there is not strong smell or taste of it in the finished product. I’ve even made cookies with it!

When I was a little girl, I’d sometime eat a piece of bread with lard smeared on instead of butter. Molasses on top of the lard is even better! 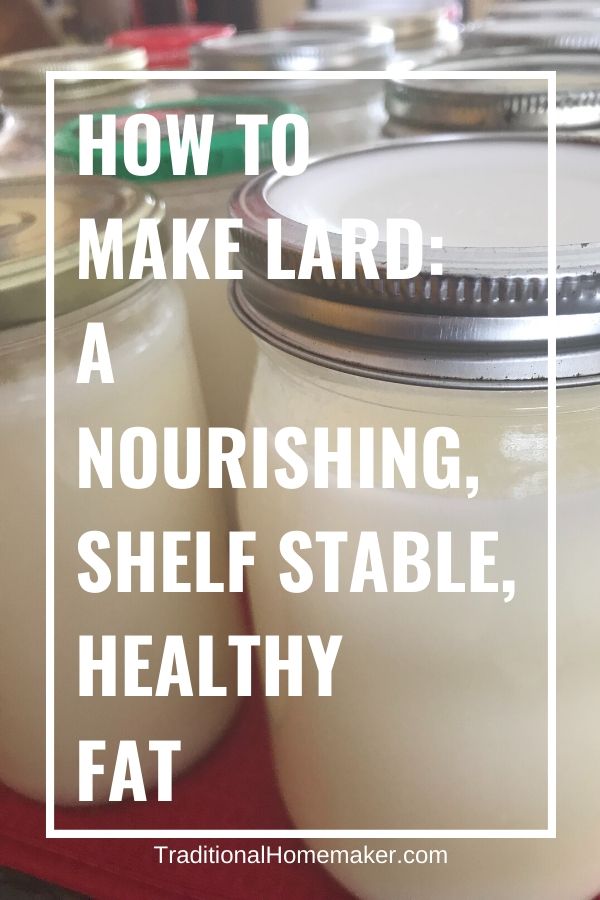 How to Make Lard

After just a few dollars out of pocket, I head home from my butcher with slabs of lard in my trunk and plans of a rendering day ahead. (Render is the term used for the cooking down and purifying of the fat.) At home I throw in the freezer what won’t fit in my slow cooker. 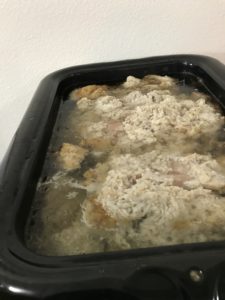 In my garage I set up my slow cooker

and cram as much leaf lard into it as I can. I pour a little water in to prevent burning until the lard starts melting. I turn it on low and wait. And wait. And wait. You will want to start this process early in the day to make sure you have time to fill jars and clean up.

Every few hours I check on my lard and stir it. Soon there will be lots of liquid fat and crumbly things on the bottom. When most of the white has melted away you can begin ladling

off the liquid fat.

Be very careful when working with hot fat!

I place my empty jars in a cake pan and fill them so the liquid lard doesn’t run all over my table when I miss. And a can filler

helps with the mess. 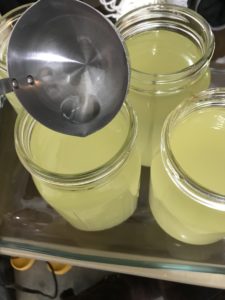 With the heat, the jars will usually seal on their own, but lard will be fine in your cellar because you have cooked all the impurities out, right? Nothing left to spoil.

Just like my butter lasts forever on the counter, right? If you are still unsure and want to be certain it doesn’t spoil, you can store it in the freezer or refrigerator.

After the lard has been stored, I place my strained out crumbles in a cast iron pan and fry. Fry these until they get oh so crispety-crunchity! These, my friend, are called cracklins! Strain off the excess fat (into a mug to use for further cooking, of course) and let the cracklins dry on a paper towel.

Salt and enjoy with your fingers! Or eat them as topping on your soup, baked potato or salad.

If you are a fan of lard, you need to check out my post all about all the ways you can use bacon grease.

Ways to Use Lard

Lard is the best frying fat. Because it is so stable it has a really high smoke point and is great for pan frying and deep frying.

Without setting off all the smoke detectors.

Keep lard on hand for frying eggs and hash browns. Use it for searing meat.

Usually, lard can be used in any recipe that calls for butter or shortening without altering the flavor and consistency.

Lard can also be smeared on a piece of bread for an afternoon snack.

Do your wooden cutting boards and wooden spoons need some tender love and care? Use lard! Rub lard into clean wooden kitchen utensils and cutting boards to prevent them from drying and cracking. Because lard is stable, it won’t go rancid as easily.

Lard is wonderful for seasoning cast iron skillets, as well.

Have you ever rendered down fat before?

Pin this to remember for later!