It ain’t pretty to talk about that space under the kitchen sink. But that’s where I keep my compost pail, and other junk that has no hope. I’ve got a few pointers on how to have a cleaner kitchen compost pail that won’t gross you out. The other hopeless junk will have to wait for another day.

But I am from the country. So I’ll try to stick with the more civilized term, “compost pail.”

Read More: How to Plan Your Garden

14 Ways to Save Money on Groceries

I am blessed to have enough space under my kitchen sink to keep my compost pail. 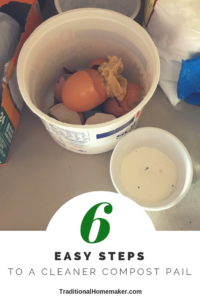 So my container doesn’t have to look nice or be Pinterest-worthy. It just has to hold my food scraps.

Usually this container is a disposable one like an old sour cream or yogurt container. Something I can toss after it gets beyond keeping food scraps even.

I used to use an ice cream bucket, but one day I had company and a boy offered to dump my pail. [Actually his mother volunteered him to and I was very grateful!]

He picked up the bucket by the handle and carried it across my kitchen to the door. I was quite nervous because the bucket squeezed into that oblong shape that it does right before the handle pops off.

Thankfully he made it.

But that was enough to say no more handles on (cheap) compost pails!

9 Ways to Use Bacon Grease

If you don’t have space anywhere to hide a compost pail, consider getting one of these adorable counter-top compost pails

! It is a hefty investment up front, but it will last you years.

The handles are sturdy so you can have littles empty it for you. A charcoal filter keeps smells and bugs at bay so emptying can be a little more at leisure depending on the size of your family.

But, hey. If a nice bucket isn’t an option right now, a sour cream container works there, too!

1. Size Down Your Container

Right now there are just three in my household. Me, my husband and a toddler. Really, we don’t generate that many food scraps.

But I still had a huge kitchen compost pail. An ice cream bucket. Let me tell you, that thing wreaked by the time I got around to emptying it! It made me dread the task of taking it out and cleaning it up.

I loathed that bucket.

Finally I got smart and realized if I used a smaller container I would be forced to empty it more often. Before the stench became unbearable.

Anaerobic bacteria are the ones making all the stink. So if you don’t put a lid on your kitchen compost pail, they can’t grow! [I didn’t figure this out on my own. My super-smart-chef brother gave me this tip.]

That’s why these cool compost pails

I know, this may gross you out. If no lid is too much, consider just laying the lid on top of your container. Or take a knife and jab a few holes in your lid if you want a tight fit.

By emptying more frequently you will also lessen the chance of insect invasion.

3. Keep a Dish of Baking Soda or Activated Charcoal Nearby

In spite of my efforts to empty the kitchen compost pail regularly, sometimes it does get away from me. Or I’ve emptied a container from the fridge that was beyond recognition with mold.

For times such as this, my ever-present dish of baking soda

does its job. Absorbing 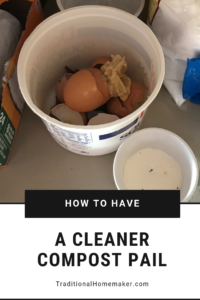 smells! Just make sure to change out the baking soda once a month or so. Or just use one of those handy boxes that can go in your fridge

You can also use activated charcoal

to help with the stink, but it is more expensive. The charcoal filter in the counter-top compost pails is what helps keep the stink down in those.

The down-sizing of your container will help you empty more often. But even so, it is worthy of its own mention.

Emptying food scraps whenever you (or your children) have the chance will make it easier to empty and keep the job lower on the gross factor scale.

I know this sounds weird, but just put a lid on the container (or don’t) and put it in the freezer overnight. Or during the winter I just set my pail on the porch with a lid so the animals don’t get it.

Once the contents are frozen solid, with a few knocks or bashes or whatever, the food scraps slide right out leaving behind a relatively clean container!

I discovered the beauty of freezing my pail when I had a bunch of grease in it. Freezing it helped the grease caked scraps slide out in one big chunk making clean-up a breeze.

Read More: Cooking for the Freezer: How to Make and Bake Ahead

One of the grossest parts of having a kitchen compost pail is cleaning up the container after emptying it.

I used to leave it set in my laundry room sink and fill it with water and a splash of bleach. It was still gross to clean up.

Now, I just rinse it the best I can and put it on the bottom rack of the dishwasher. Everything in there gets sterilized anyways.

And by implementing all the previous steps, my compost container really doesn’t get that nasty anymore.

I don’t empty my scraps in any official compost bin

. I live in the country so during the winter, I just dump everything on my garden.

In the summer, when I don’t want fresh garbage (or to attract animals) in my garden, I dump my pail out back in the woods on a pile.

If you empty your pail into a composting bin, make sure to read up on what you can put in there! Some foods won’t break down as favorably or may even damage the bacteria that are doing your composting.

Keep it small, with no lid and baking soda nearby to help with the task of keeping a compost pail. Empty the container often, freeze it and throw the container in the dishwasher to lessen the gross factor. Really, anyone can have a cleaner kitchen compost pail!