We all spilled out of our vehicles for the umpteenth time. I grabbed by son in his car seat and followed the church crowd across the street in a town too tiny to merit a post office.

Of course the town boasted two churches and three bars. That’s how the numbers go in northern Wisconsin: always more bars than churches.

To my surprise the leader of our caroling crowd headed straight for an old bar! [This would be the fourth bar because I thought it was defunked and didn’t include it in the first three.]

My husband and I had driven past this old building many times before. The two-story stone building was covered in vines that masked its age in the summer but added to its age in the barren winter months. 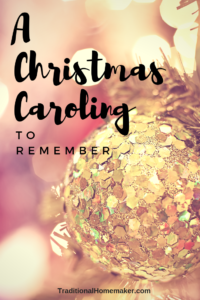 I had asked my husband in the past if the bar was still operational. Once in a while there was a car parked in front indicating there might be some sort of life inside yet. The Pabst Blue Ribbon sign still swayed in the breeze above the door. And one of the bow windows was filled with foliage. House plants that were obviously being cared for by someone.

My curiosity was spiked as our leader opened the front door to the bar and hollered out a lady’s name. I was almost giddy crossing the street at the thought of peeking inside this mystery building. Apparently someone lived here! And oh, the irony of a crowd of Mennonites entering a bar on a wet winter evening.

The proprietor invited us all inside. To my surprise the worn tile floor was swept and mopped clean. The bar stools were neatly lined up along the bar and the counter itself was wiped clean. Dotting the bar were several napkin holders and salt shakers: one of the first signs to me that people must still stop for a drink.

My first inside breath was hard liquor. Sweeter than the smell of beer but enough to let me know there was plenty of booze inside. Definitely not stale. I worked my way to the front of the caroling crowd in search of an empty bar stool to set my son on.

Someone led out with “Joy to the World.” Twenty-some voices – including the lady’s – filled the room and bounced up to the high ceilings as we sang through two verses.

To the left of the liquor display was an open door leading into a kitchen. This must be where the lady lived. There was a refrigerator and stove both piled high with so much stuff I wondered how it stayed balanced so perfectly. A yellowed fluorescent light lit the area.

We began another song “O Beautiful Star of Bethlehem” and the lady still sang along with us, surprising me by knowing the words to this less than popular Christmas song.

I looked past the singers that were in front of me and saw beyond them a darker room attached to the bar room. Not a square inch of wall was visible through all the knick-knacks and antiques on display.

In the middle of that room sat a pool table. It looked like someone had used it recently as there was only one pile of stuff on the cover protecting it and a cat perched next to the pile.

Underneath the pool table wasn’t a spot to lose a ball. It was crammed with more stuff: bottles of this, bags of that and who knows what else. 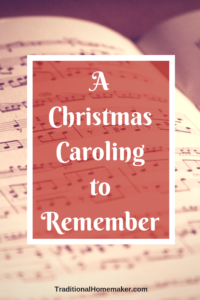 little too high, but we managed since our voices had been warmed up from several stops before. Thankfully all the harmonizing carried us sopranos through.

Hanging from the beam that slightly separated the pool room from the bar were perfectly strung Christmas garland and balls. Judging by the amount of dust that was settled on the decorations I’d guess that they’d not been taken down in years.

From the beam my eyes kept wandering along the ceiling (terribly rude, I know!). But there was a whole Christmas village up there! A five foot square piece of ply wood was anchored to the wall on one side and the other side was secured to the high ceiling be lengths of chain from each corner. The Christmas village was stored on this board – permanently.

Our caroling crowd finished up with two more songs and ended with “We Wish You a Merry Christmas.” At the last note, people started filing out the door heading back to their vehicles. One of the guys at the back of the crowd thanked the lady and mentioned something about hearing she yodels.

“Oh yes! That’s right I do!” the old lady squealed with delight. “Would you like to hear some?”

“We sure would,” responded the guy, “that’s kinda why we came!” 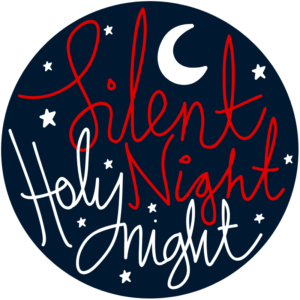 Without hesitation, her arthritic hands began bouncing along the ivory keys, releasing a tinny, but in-tune sound from the aged piano.

Her pure, lovely voice belted out over the piano and I was gone. I sat down on a chair with my son in my lap and couldn’t help but bounce along to her catchy tune.

Lyrics were not needed as she yodeled an entire tune for us. Her energy in every note and throw of her voice catapulted me into the next stanza of music and I could’ve sat there all night listening. Even the youngsters in the crowd who hadn’t heard yodeling before were enthralled.

After her fingers released the last of the music from the ivories,  we whooped and cheered for her. What a delight!

She turned around beaming and said, “I’m so glad I could share something with you tonight.” And the smile that filled her face shared years memories and entertaining that I’ll never know.

As we were walking back to our vehicles, an older fellow from the group shared with me that she plays the harmonica, too. The oddest, most complicated harmonica with six parts to it.

And then I learned that I can listen to her any time I want! You see, she’s drawn quite the attraction and has been featured by Wisconsin Public Television! Wisconsin Life featured her just last year!

This was definitely a Christmas caroling to remember for years…

More Reading: About Me